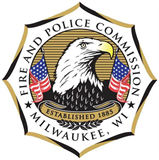 On July 27, 2017 Mr. Farris drove to Milwaukee to address the MFPC. Below is his statement.

“Today, again, I drove here for an opportunity to address this Commission regarding the issue of police pursuits.

Pursuit For Change is an organization focusing on pursuit policies, legislation, technology and officer training designed to reduce unnecessary police chases and save citizen and police officer lives.

As I explained to the FPC on June 15th, my 23-year old son was an innocent victim, killed in an unnecessary police chase outside of Boston in 2007. In that crash, a second innocent citizen died and another was so severely injured that her recovery took many years.

That was a fateful pursuit that occurred in a densely populated city not all that different than Milwaukee.

I have been following the highly publicized and generally contentious pursuit policy-related communications between Milwaukee’s Aldermen, the FPC and Chief Flynn.  I have also read the FPC’s July 13, 2017 pursuit directive issued to Chief Flynn. 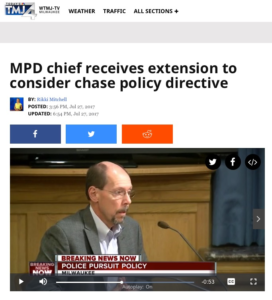 I am disappointed FPC did not consider, as I requested, allowing Pursuit For Change an opportunity to address you before you issued this directive.

For years now, all across the United States, local law enforcement, Sheriff’s departments and State police have continued to strengthen their pursuit policies in an effort to reduce chases. This is especially true as it relates to pursuits in densely populated jurisdictions.

Other law enforcement and legislative bodies are certainly NOT weakening pursuit policies.

How will the FPC respond when innocent bystanders are injured and killed for chases started under this new policy?

And how will the FPC and City of Milwaukee respond when those innocent citizens bring legal actionsbecause the FPC weakened policy, contrary to other jurisdictions, was the direct cause of the injury or death?

Finally, have you considered other already available options? Have you considered funding additional technology tools that are proven to safely reduce the need for more dangerous pursuits while still allowing the capture of car thieves, drug dealers and joyriding kids?

You already have a well thought out pursuit policy, implemented after the unnecessary deaths of Milwaukee citizens several years ago.

I once again ask that you remember the tens of thousands of innocent citizens and police officers unnecessarily injured and killed during dangerous police chases as you make changes to Milwaukee’s pursuit policies.