It is a simple and horrible fact that #PoliceChases affect families across the US every single day. The following note is from a dear friend who lost her sister. We have included the full article by Charlotte Observer reporter Bruce Henderson.

I thought you might be interested in an article published yesterday in the Charlotte Observer. This upcoming week is celebrated as “Sunshine Week” in newspapers across the country. The Observer thought our family’s story would make a good anecdote for an article about the importance of granting the public access to government records–what in Florida was broadened some years ago through a “Sunshine” law.

After the deputy editor spoke with me, he decided that they could make more than an anecdote out of our story. He put another reporter onto it, who asked lots of detailed questions. The resulting article has a few errors and  gaps, but over all it’s the best thing ever written about our family’s experience with an ill-considered police pursuit and our subsequent quest to learn what went wrong.

For the pursuit issue, keeping careful records and then making those available to the public is of critical importance, as we’ve found. I think we’ve also found that non-compliance with policy on pursuits is associated with other lapses of professionalism on the part of law enforcement. And we’ve seen that these problems are often most pronounced in small town departments. This article illustrates all of that. 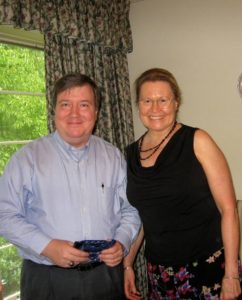 After learning that her sister had died in her hometown of Belmont, Ellen Deitz Tucker wasted little thought on the driver whose careening car had killed her.

She wondered instead about the local police. Why would officers risk innocent lives by chasing someone at 80 mph?

Donna Deitz, 60, and her lifelong friend Kevin Loftin, 56, a former Belmont mayor, were returning from an Ash Wednesday service that night in February 2012. An Acura SUV driven by Lester Saunders Norman Jr., with police in pursuit, smashed into Loftin’s Audi.

Then-police Chief Charlie Franklin told reporters that officers pursued Norman because his vehicle had nearly struck two officers when he pulled away from a DWI checkpoint. Norman was on federal probation and didn’t have a driver’s license.

Franklin said that Norman, after being captured while running from the crash, had said he didn’t want to return to prison.

Tucker, a writer and editor for an educational nonprofit who lives in California, wasn’t satisfied.

Her search for answers led her to file a lawsuit to win access to a report of an outside investigation of the Belmont Police Department. It also made her story part of North Carolina’s annual Sunshine Week, which begins March 12 and is devoted to access to public records.

“It just seemed to me,” Tucker said, “that the public deserved to know what they paid for.”

Tucker and her brother, Dan Deitz, questioned what they viewed as the police department’s “highly improbable” account of the pursuit that started on Interstate 85, including statements that Norman had approached a checkpoint at high speed, was drunk and drove toward officers.

Norman’s car initially didn’t move fast as he pulled away from police because it had a bad transmission, Tucker said she learned through a private investigator the family hired.

After exiting the highway, though, the SUV gained speed as it traveled downhill on Park Street toward a busy intersection of Wilkinson Boulevard. Investigators estimated Norman’s speed at 80 mph.

Kevin Loftin, driving west on Wilkinson, was known to be a slow driver. Classical music played on the radio. His car windows were up on a dark, misty night.

The stoplight turned green for Loftin just after it turned red for Norman. Two police cars were a few lengths behind him.

Norman didn’t stop and crashed into Loftin’s car. Loftin and Deitz died at the scene.

Norman was sentenced, after pleading guilty to second-degree murder, to up to 32 years in prison in late 2012. At his sentencing, he had looked at Tucker but said nothing. A year later, he wrote Donna Deitz’ family a neatly penciled letter of apology.

He hadn’t said anything in court, Norman wrote, because “Normally when a person apologizes to the court and the victims, most of the time it’s because they want mercy from the court. Although not all people are like that but the majority are and I don’t want to be looked upon as such.

“I made the absolute worst decision of my life driving away from that license check and it caused two people their lives. I take sole responsibility for that, and it’s a burden that weighs heavily on my heart everyday.”

The crash weighed heavily on Belmont, too. Local connections run long and deep in the town of 10,000 that was founded on cotton mills.

Loftin was a native son who led a controversial $1 million revitalization of downtown Belmont that ultimately cost him his seat as mayor. He took part in numerous church and civic activities.

Donna Deitz, Tucker’s older sister and their parents’ caregiver, was “an upbeat person who brought a lot of joy into the family.”

A year after the crash, the police department revised its policy on pursuits and check points. Tucker saw little improvement in the new policy, which deleted a “continuing physical threat” as grounds for a chase and replaced it with an explicit list of situations in which one would be allowed.

Franklin, then Belmont’s police chief, said his officers did nothing wrong.

It was difficult to get facts about the crash from police, Tucker said, and she found information in press reports to be inconsistent.

Then, a retired police officer working as a private investigator in Charlotte who had seen an account of the crash on television knocked on the family’s door. The investigator, John Faber, also questioned the police actions. The family hired him to dig for answers.

Faber obtained the official police records of the chase and crash, including witness statements, lab reports and videos of police questioning Norman and a passenger in his vehicle. The family says the videos and witness accounts contradicted those of police.

“How does what (Norman) did differ from not caring who you kill to try to catch someone?” Tucker said.

Tucker and her brother sued the city in March 2013, charging that negligence allowed the pursuit to occur. They later dropped the suit.

When she read that Belmont had launched an outside investigation of its police department in late 2014, Tucker sent a 50-page summary of her investigator’s findings to the city manager and council members.

The next summer, she and her brother filed a public records request with the city for the investigation report. The city quickly denied the request, citing pledges of confidentiality given to police personnel that made it unable to release the report.

In August 2015 the siblings sued again with support from the Civitas Institute, which promotes transparency in government. The lawsuit alleged the city broke the state’s open records law by refusing to release the report.

Citizens across the state press for government records to be made public “in a way that would make the most dogged reporter proud,” said Jonathan Jones, director of the Sunshine Center of the North Carolina Open Government Coalition at Elon University.

“What separates (Tucker) is that most folks are turned away by the sheer cost of pursuing this, and she found a way to make it work.”

Last August, under a judge’s order, the city released 22 of the report’s 160 pages, some heavily redacted. The internal investigation by U.S. ISS Agency, a private firm, focused on a “massive” number of internal complaints about the department’s management.

The investigation “found the (Belmont Police Department) to be a fractured organization with a corrosive work environment in which employees have been drawn into two camps, which are constantly in opposition based on personal loyalties,” the report said. “Policies and procedural guidelines are routinely ignored or circumvented.”

The report was presented in February 2015. The city fired police Chief Franklin in April 2015 for unsatisfactory job performance and detrimental personal conduct.

“I think I got an overview of the department culture in which something like this could happen,” Tucker said after winning partial access to the report.

Tucker says she has ambivalent feelings about Belmont.

Many people have shown kindnesses, she said. Neighbors fixed things at her parents’ house, and church members visited. But it was also hard to get residents to stand by her as she tried to get answers.

“So I have to say for all this to work, citizens need to care about their neighbor, they need to stick their neck out, sign a petition, attend a meeting, they need to read their newspaper,” Tucker said. “It takes work, not just on the part of journalists but on the public.”

Jonathan Jones, director of the Sunshine Center of the North Carolina Open Government Coalition at Elon University, said the Belmont case illustrates how hard it can be to pry open public records. Filing a lawsuit, as Tucker did, is often the only option in North Carolina.

“It comes back to what I see as a fundamental breakdown in how transparency laws in North Carolina are working,” Jones said.

“It essentially becomes a dare to take us to court, and if you get taken to court (and lose) there’s not a lot of negative consequences…. Because there’s that court requirement, there’s no real incentive for a government agency to be transparent in the way they should, and in fact no real harm in failing to be transparent.”

Records are often withheld out of misunderstanding of the law or fear of repercussions, Jones said. Belmont’s city council, he said, had the authority to release all or part of the investigation report on its police department. It didn’t.

adminShe questioned police version of sister’s death – then fought for the truth03.14.2017