On May 27, 2007 our oldest son Paul was killed in a vehicle crash. Some days it seems like yesterday. Other days it doesn’t even seem real. 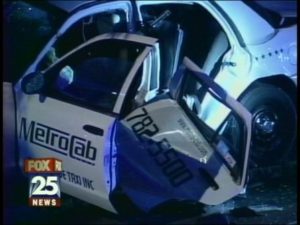 Walid Chahine, the driver of the taxi in which Paul was riding, succumbed to injuries and died one week later. Paul’s girlfriend, Katelyn, miraculously survived. But she spent months in the hospital and years in rehabilitation before she returned to normalcy.

Because an unlicensed driver made an illegal U-turn and then made a conscious decision to run from police. And because a State Trooper made a conscious decision that this particular misdemeanor violation was an important enough infraction to warrant the ultimately deadly, high-speed police chase through the narrow streets of several Boston suburbs.

And so, because of one very stupid individual’s decision to run, two people are dead and too many of us now live with that horror forever.

I’ve spoken about this ad nauseam, but the loss of a child is inexplicable and it rips an immense hole in your heart. Many parents and siblings never recover from such a loss.

Perhaps we are the lucky ones, because we survived? Perhaps.

Since Paul’s death I’ve researched, reported on and suggested changes for various aspects of problematic police pursuits. I joined the advocacy PursuitSAFETY and later started Pursuit For Change.

Some chases, such as those to apprehend dangerous violent felons, are often necessary. However, the vast majority of chases begin as a result of traffic violations or property crimes such as shoplifting or theft.  Those pursuits are almost always unnecessary. Yet every day there are more. Many, many more.

Federal reporting of ​police pursuit deaths is still not mandatory and there is virtually no reporting of police pursuit injuries. So we must interpolate using information from those agencies and states that do keep reasonably accurate statistics.

Geoffrey Alpert, a professor of criminology at the University of South Carolina who has studied police pursuits since the 1980s, says the actual number of fatalities is “three or four times higher than reported.”  Others think that even this estimate is low. And another complicating factor; bystanders killed after police stop chasing suspects — even seconds afterward — are never counted.

From incomplete National Highway Traffic Safety Administration (NHTSA) reported data, approximately 360 people are killed every year in police chases. Using these reported numbers, in the ten years since Paul’s death another 3,500+ people were killed. If you interpolate, that number is likely closer to 14,000.

About one third of those killed are innocent bystanders, like Paul and Walid. And more than a fair number are law enforcement officers, killed during or while responding to a police pursuit.

​In that same ten-year period, using woefully inadequately reporting, we estimate that at least five times as many people were injured. That’s more than 17,500 (70,000 if interpolated) individuals hurt, with many of those injuries being life-altering.

The statistics are staggering. The human toll is unnecessary.  AND NEARLY NOTHING HAS CHANGED SINCE PAUL FARRIS WAS KILLED.

Perpetrators flee from police for every imaginational reason. Often it’s due to an outstanding warrant, no driver’s license, alcohol or drugs in the vehicle, or simply out of some irrational fear. Regardless, more than ninety percent of pursuits are for non-violent crimes. All too often law enforcement’s decision to pursue is made instinctually, rather than with clarity and forethought of potential outcomes.

“All personnel operating department vehicles shall exercise due regard for the safety of all persons. There are no assignments or tasks of such importance that they justify the reckless disregard of the member’s safety or the safety of other persons. Members must be mindful of the balance between achieving the goals of law enforcement while maintaining the public’s safety.”

​Public safety. Common sense. Split-second decision-making. Most LEO’s exhibit great strength in these critical skills. However, all too often, these skills are overridden by an officer’s gut instinct to chase anyone who flees, no matter the reason. ​That is what must change.

A police pursuit policy is only as good as it’s implementation. Allowing officers to pursue for any reason puts the fleeing driver, innocent citizens and LEOs at risk.  POLICE PURSUITS ALWAYS ENDANGER PUBLIC SAFETY – ALWAYS.

​Most law enforcement agencies need support, additional training and additional funding for alternatives to pursuits, such as pursuit reduction technology.  Pursuit For Change works with technology partners and legislators to enact positive changes and provide sources of funding for LEOs.  Legislators in Washington DC have responded to our requests and have adopted our proposed 2017 Appropriations language. And we will work diligently for additional changes and LEO funding in the 2018 Appropriations Bills.

We need your help. Most substantive Federal, State and local changes occur because citizens like you and me communicate with and teach the decision-makers. Without your voices and stories, change is nearly impossible. And without your voices, many more innocent bystanders will certainly die as the result of non-violent felony police chases.