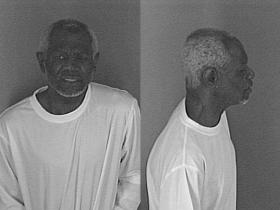 A man who police say stole a truck, sparked a police chase and caused a crash that killed a Topeka woman was charged Monday with first-degree murder.

Sherman N. Jenkins, 62, of Jefferson County, appeared before Judge William Ossmann in the morning via video feed from the jail. Jenkins, who was wearing a light blue jail jumpsuit, barely spoke.

Jenkins also is charged with fleeing or attempting to elude a police officer, two counts of aggravated battery, driving with a revoked license, misdemeanor theft and driving with a bad taillight.

Ossmann set Jenkins’ bond at $1 million cash or surety. An attorney from the Northeast Kansas Conflict Office will represent him.

Jenkins was driving a stolen red pickup truck when he led police on an 11-minute, “low-speed” chase early Thursday morning that ended in the crash. He was booked into the Shawnee County Jail on Friday after being released from a local hospital.

Mia Holden, 34, died after being injured in the three-vehicle crash at S.W. 6th and Topeka Boulevard.

Topeka Police Lt. Colleen Stuart said after the crash that Jenkins may have avoided at least one of two tire deflation devices — commonly referred to as “stop sticks” — at the south end of the Kansas Avenue Bridge, and the truck he was driving was gaining speed as it entered the intersection where the crash happened.

Holden was a passenger in a gold-colored car that Jenkins struck with the stolen truck, according to police. The passenger’s side of the heavily damaged car was caved in. The car came to rest facing northeast on the south side of the intersection. The red truck, which was damaged on its front, ended up facing the opposite direction.

Police said the pursuit that led up to the crash started at 5 a.m. after officers attempted to stop a vehicle for having no taillight at St. John and N. Kansas Avenue.

Jenkins refused to pull over, according to police, initiating a pursuit that police said “weaved around” North Topeka before heading south over the Kansas Avenue Bridge. Speeds were reported at about 18 mph before the truck reduced its speed to 5 mph on the bridge.

The truck then turned left, or south, onto Topeka Boulevard, where it began to speed up.

The truck, traveling south on Topeka Boulevard, then entered the intersection at S.W. 6th, where it crashed into the car in which Holden was a passenger.

A smaller white car that also was hit by the truck had rear-end damage and came to rest facing northwest in a parking area along the north side of 6th, just west of Topeka Boulevard.

Patients from all three vehicles were taken by American Medical Response ambulance to a local hospital.

The Topeka Capital-Journal was the only media outlet present at Jenkins’ appearance on Monday.

Jenkins has a criminal history. According to Shawnee County court records, last year Jenkins pleaded guilty to making a felony criminal threat. Additionally, in a case from 2012, he pleaded guilty to the felony burglary of Meadows Elementary School, 201 S.W. Clay. When officers responded, a police K-9 located Jenkins and bit him (http://cjon.co/1ScavgI). Jenkins also pleaded guilty in a 2012 domestic battery case.