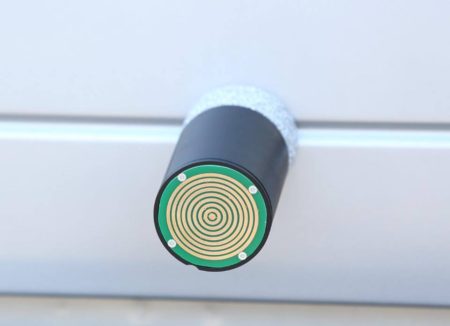 Rockdale County, GA — Have you ever found yourself caught in the middle of a high speed police chase?
Though they may be entertaining to watch on television, police pursuits often end in violent collisions that kill or injure thousands of innocent bystanders and police officers each year.

Now, a new technology could change the way officers go after suspects and prevent these risky chases from ever occurring.

These accidents are a leading cause of injury, death, and lawsuits involving police officers, and can cost taxpayers an average of $3 million. But officers aren’t the only ones at risk during a high speed chase.

High Speed Chase Is Not Entertainment

Sheriff Eric Levett, in Rockdale County, Georgia, says anyone can be a victim of a police pursuit.

“With chasing, anybody can pull out in front of you, your breaks can fail, there’s a lot of different things that can cause some type of danger to the deputy and or the community,” he explained.

Jon Farris learned the hard way that in a matter of seconds, anyone can be a victim. His 23-year-old son Paul was on his way home in a cab when a vehicle pursued by police crashed into him at more than 70 miles per hour.

The state trooper went after the driver for making an illegal U-turn, despite the city’s no pursuit policy for any crime other than violent felonies. The officer faced no reprimand because according to state police rules, he was within his right to pursue.

An overwhelming number of police pursuits are started over non-violent crimes and escalate quickly, endangering the suspect, the policeman, and any bystanders along the way.

He found on average that one person dies each day as the result of a police pursuit, a third of those deaths being innocent bystanders.

An FBI report uncovered that the true cost is probably two to three times higher than the stated average because pursuit fatalities are only reported at the discretion of law enforcement.

No government agencies track injuries from pursuits, leaving no information on police officers and bystanders paralyzed, brain damaged, or suffering from other life altering injuries.

In order to cut down on high pursuit casualties, authorities like Sheriff Levett are investing in new technology known as Star Chase.

“I know that this technology has been a great investment, from the times we’ve launched this GPS tracking unit we have had a successful capture rate,” Levett said.

Star Chase allows officers to deploy a tracking device on vehicles without the driver knowing they’ve been tagged. For about $5000 per vehicle, officers can secretly but safely catch cars on the run.

Officers can deploy the tracker while they are behind a car they are pursuing or from outside their vehicle if a car they pulled over decides to flee. Drivers cannot feel the tracker hitting their car, so they do not know they’ve been tagged.

As the suspect thinks he is no longer being pursued, the officers begin their stealth pursuit, pulling up a map of the suspect’s location and alerting fellow law enforcement where the car is heading.

In most cases the suspects slow down to safer speeds because without the police car following them, they think they have gotten away, letting fellow drivers and bystanders avoid being in the middle of a high speed pursuit.

“When you can launch something and you can track it, you can discontinue the chase and just begin tracking the vehicle. You can apprehend the vehicle and or the suspect later,” Levett said.

So far, only a handful of Rockdale patrol cars have Star Chase, but Levett wants to invest in more Star Chase vehicles because of its success rate.

‘No Injuries’ with Star Chase

Most departments rely on decades old tire spikes to stop chases, but even they are rarely used because of the danger involved. Police must also know where cars are heading.

One Rockdale County Police Officer explained the potential dangers to the officer when deploying spike strips.

“Trying to deploy stop sticks sometimes is very dangerous, especially if you put them out and the car swerves toward you, I’ve seen several videos of officers getting struck trying to deploy spike strips,” the officer said.

Levett admits new technology can be expensive, but he says it’s nothing compared to the cost of chases gone wrong.

“And not only that, the agency is losing a man or a woman that is down for weeks,” he added.

Levett says providing officers the right tools protects their safety as well as the citizens.

“Behind the badges of those who put on this uniform are humans,” Levett said. “They walk out the doors kissing their loved ones, telling them that they love them not knowing if they’re ever going to return back to the house again because they are leaving that home to protect and serve the people of their city, their county and this great state.”

“I want the people to know that we’re out here doing the best that we can, and all we want to do is protect and serve you,” he said.

Since his son’s death, Farris has worked hard to raise awareness of this issue on a national level. He started an advocacy group called Pursuit for Change, which encourages lawmakers to dedicate funding for increased pursuit safety and training,

The group also wants mandatory reporting for all police pursuits and rethinking of the current pursuit policies in hopes of preventing more unnecessary lives lost, like his son Paul’s.

“If we can get changes that will save a life a day, that’s a pretty big deal,” Farris said.